Back in 1992, the kiss-me-quick nature of limited overs cricket, certainly on a Sunday, was a very future concept. Matches began at 2 or 2.30pm, the first side had until tea at 5pm to bat, and after that it was twenty overs plus an hour. Thus, some matches would finish beyond half past seven. It could be quite a long day out as the local pub was nearly always frequented afterwards. It would be considered anti-social to have done otherwise. Sometimes one wonders whether that, across the nation, a more informed local constabulary would have had a field day with the less socially conscious driver on their way home. Different times.

Certainly, there was an aversion to the limited overs game and plenty of Sunday clubs around that supported this view. Wanderers were certainly not in favour and resisted, and perhaps avoided, some teams who might insist on such a format. This despite the format being established in county cricket- albeit at a minimum of 40 overs. There were the odd evening bashes of 20 overs, but you could count on one hand the amount of such matches Wanderers would have played during this period.

So, on a day when Wanderers journeyed to Mid-Sussex to meet Scaynes Hill a full Sunday would have been anticipated with a dry and cloudy day in prospect.

Scaynes Hill was, and probably still is, a small ground set just off the A272. This wasn’t Wanderers first visit. There is an historical connection to Scaynes Hill who took part in the 1997 70th anniversary celebration week at Plumpton sending a very good side as well.

Wanderers won the toss and put the home side in. Tea was had after 41 overs and a score of 122-6. Slow by today’s standards, but probably a little under par for the period. The bowling attack was relatively strong, but the pick of the bowlers was Mick Thompson who would not normally have been expected to claim the title being more renowned as an opening batsman than a first change bowler. Mike bowled medium pace with a rotating and whippy action. His three wickets came economically and at low cost. Wanderers would have been fairly happy in the hutch at tea.

Thommo and Brokesy batted eight overs for an opening stand of 17. Alan was a free scoring, chancing opener. A cross between Taylor Salerno and Peter Styles but with a more solid defence. He appears to have played second fiddle that day as the bowling was tight. Ulsterman Mike was more textbook and steadier. Once the stand had been broken Mike followed a couple of overs later- and there started a capitulation. It’s not as if the mid-order was bereft of ability. Teflon, Jacko and Nick Clarke were capable performers, but the Binary Club that day became the Primary Club with all three falling without troubling the scorers. The carnage continued and with plenty of overs to spare Wanderers were 50-9.

Despite a probable twenty overs plus remaining, the anchor was dropped. With Mark Scholfield and Dave Field at the crease, aside of perhaps Nick Clarke in form, there were no two better than to frustrate the bowling.

And thus, it happened. For the next 23 overs the Scaynes Hill bowlers were met with the Scholfield straight bat and Dave Field dab. 31 runs were scored, a fair number of which look to have been extras. It was the perfect afternoon of attrition. Cardiff 2009 takes a poor runner up slot.

Such matches are almost a by-gone memory. And some may morn their passing, others not. The scorecard of the match has been reproduced here for Wanderers Greatest Escape. Whether or not such an event occurs again, whether or not folk would wish to see such a happening, is up for discussion. But for those who were there, as those who were at Cardiff in 2009 would confirm, it very much felt like a victory- and a worthy Wanderers memory.

Keeping it friendly since 1927, Southwick Wanderers can be seen in various fields of splendour chasing the vector of disease in calamitous play.

The club plays most Sundays throughout the summer and the odd mid-week evening game.

New members of all standards are always welcome. Contact via this page. 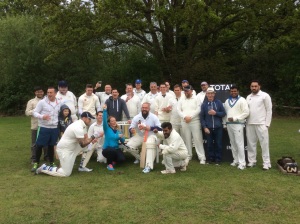 The Season That Was- 2020 Averages

Will And Teflon In Fine Fettle, But Wanderers Defeated- SWCC v Scaynes Hill 06.09.2020